The Engineering Student Society has a long and varied history, the most iconic of which begins with our cannon, Big Thunder. The cannon is located in the Centennial Building courtyard, was built in 1972 by a loyal and faithful band of engineers to stand as a symbol of engineering at Lakehead. There were many reasons for choosing a cannon as an engineering symbol.

Many famous engineers used cannons in their research to develop concepts both students and professionals use today. Joseph Fourier developed the principles of heat transfer by observing the energy being dissipated through the barrel walls. Ernst Mach determined the relationship for the speed of sound by firing projectiles from a cannon. The cannon also stands as a reminder to all engineers of the duality between destructiveness and development. But more than anything, it represents the strength and power of engineering.

Big Thunder has had a long history of vandalism. Since its erection it has been painted yearly by many rival faculties, only to be repainted black by the engineers. In 2003/2004, the cannon was painted green four times in a row, including the slogan “Forestry” both on the cannon uprights and sidewalks surrounding t
he cannon grounds. This led to an estimated 1100 pounds of wood chips being spread in the forestry lounge. The cannon remained untouched for the rest of the year. 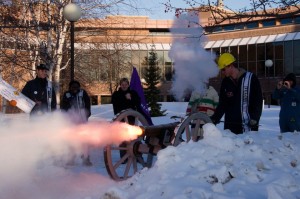 In 1975, the foresters removed the cannon and placed it in Lake Tamblyn, but the engineers rebuilt it and rededicated it in 1976. Apparently the same happened in 78/79. It stayed relatively safe until a certain group of outdoorsy students filled it with concrete, tempting to silence it forever. But even that couldn’t deny Big Thunder: The end section was bored out and rendered operable, and then totally replaced in 1992. It underwent a full cosmetic restoration in 2000. In the past they used to say Big Thunder was unstoppable: its power was surpassed only by its fortitude. Despite surviving the ravages of time, Big Thunder is currently full of cement, and will need to be re-bored once again!

Traditionally, the cannon is fired to signal the start of Frosh Orientation and Engineering Week. We hope that soon, the cannon, BIG THUNDER, will sound to let everyone know that the Engineers are on the loose!