The story behind the iron ring goes way back to the turn of the century. It began at the largest cantilever bridge in the world, the Quebec Bridge over the St. Lawrence river. This Bridge collapsed twice, first in Aug. 1907 when the south arm of the half finished bridge failed, killing 86 workers. The second time it failed was Sept. 1916. While the main span was being hoisted into place 150 feet above the river, one of the jacks failed and the entire structure fell to the bottom of the St. Lawrence, killing 11.

Engineers work and their grave errors were blamed in both cases. 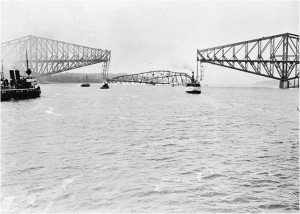 In 1917, an identical span was carefully hoisted into place, the bridge finally successfully completed, and eventually opened to traffic. The Quebec bridge remains a physical reminder to Canadian Engineers of the tragic cost of human error in Engineering work.

Canadian Engineers now wear a ring, called the Iron Ring, on the pinky finger of the working hand. The iron is said to be taken from the debris of the fallen Quebec Bridge. The ring is obtained during the “Ritual of the Calling of an Engineer”, a ceremony held only for eligible candidates. During the ceremony, Engineers individually obligate themselves to high standards of integrity that the profession has established.

The Ritual began in 1922 and was based on the suggestion that young graduates should subscribe to some oath or creed which reflected the principles would use during their practice. The first ceremony took place on April 25, 1925. Behind the closed doors of the ceremony, many words were spoken, but the most prominent were the words of the Obligation. The Obligation basically states that Engineers will not have any part of poor workmanship and will honorably guard professional reputation. Rudyard Kipling wrote the Ritual of the Calling of an Engineer back in 1922 and said that “The personal copy of the Obligation may be framed or exhibited by the owner, but beyond this the papers, meetings, and business of the Ritual while no mystery, are neither for the public nor the press”. Kipling said “Iron Ring is cold because the material is unforgiving when Engineers make mistakes”.

The Iron Ring is a symbol of humility and continuity. Most of all, the Iron Ring reminds the Engineer of the oath taken during the Ritual and that they must take due care in making decisions, consideration for life and safety must be Paramount.