One cold wintery night just outside the village of Mayo, Yukon, there was a moose named Ronaldophilus James Henry Jones III. His parents were killed in a tragic snowmobile accident when he was very young, and he was left to fend for himself on the streets. Soon, he fell in with an odd crowd; Super Cow, the Tacky Kenguin, and Deb WESST, the concrete donkey,  became his best friends. Together they went out drinking and building odd contraptions in the village of Mayo every night, leading the locals to nickname Ronaldophilus “The Moose”. The village liked the new contraptions but the gang grew bored and decided to find somewhere new to roam.

As dawn broke, they set off towards the rising sun. Day and night they traveled, and The Moose and his friends ran run loose through all the villages on the way before setting off again.

Eventually they came to a great body of water. It was cold and there were a lot of polar bears around. They stopped to ask one how they could find another town to explore, and he told them to follow the shoreline until the terrain became rockier and the snow started to melt. From there they would have to turn southwards in order to continue their journey. 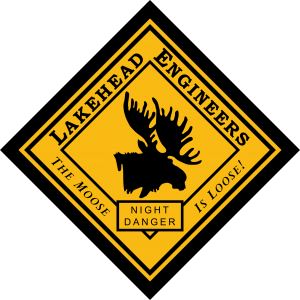 The Moose and his friends followed the polar bear’s advice and finally came upon city bigger than any other they had seen! They liked this city. It was much warmer than Mayo, and it was right on a lake. The friends knew they could enjoy themselves there. During the day the friends worked hard to improve the town but after a while, they started noticing signs with a picture of The Moose warning of night danger; apparently they were having too much fun at night. Then one night, the Tacky Kenguin swam across the lake. A few months later Super Cow moved out west. Later even Deb the Donkey disappeared and The Moose was alone.

The sullen Moose went out that night and serendipitously ran into a human. The human took The Moose to meet some of his friends and told The Moose that he was part of a special society. The Moose was lonely, and it seemed like these humans shared some of his interests, so he agreed to be their newest member. After The Moose joined the society, he taught the humans about what he used to do with his friends. They began going out with The Moose, building some days and drinking on others, and became his new best friends. The Moose can often be spotted at ESS events and every night there were reports of missing alcohol and moose sightings.